For those not in the know today was my birthday. Having done most of my celebrating on Saturday, I can’t say that today was not devoid of anything exhilarating. First of all, I had to work. Second, of all I was by myself. There are people who do ok by themselves, but I am not one of them. I wouldn’t say I make horrible decisions by myself, but I sometimes need to realize that some of my ideas are not that great.
Anyhow, at work today everyone was talking about KFC’s double down. Everyone was calling it a “heart attack” sandwich, but it doesn’t have any bread (unless you count the breading part). So can you still call it a sandwich if it doesn’t have any bread? So of course with my excellent single decision making skills I decided I was going to buy one after work.
After having one I have to say that my first impression is it doesn’t live up to the hype. I ordered the regular double down, but I took out the bacon (I really don’t like fast food bacon). Without the bacon it came down to two small breaded and fried breasts, two pieces of cheese, and special sauce. The combo came with one side (I got corn on the cob) and a regular soda (I got pink lemonade). Really two pieces of chicken is not that much. Tell me the last time you only ate one piece of KFC chicken at a time? Just for comparison sake I looked at some other fast food items I have tried:
Wendy’s Crispy Chicken Deluxe Sandwich : 460 Calories
KFC Double-Down: 540 calories
McDonald’s Big Mac: 540 calories
Hardee’s 1/4 lb Little Thickburger: 570 calories
Burger King Angus Burger: 640 calories (I was paid to eat two of these)
Burger King Whopper: 670 calories
In and Out Double Double: 670 calories
Carl’s Jr. Six Dollar Burger: 890 calories
Ruby Tuesday’s Colossal Burger: 2000 calories (actually, I have never tried this, and it isn’t a fast food place, but the fact that it is on the menu is crazy)

Anyhow, my point is the KFC Double-Down is not the great heart attack it has been reported to be. It actually was ok, but I think I like my chicken without cheese so I probably will not be ordering it again. Oh, that is another thing; the combo was like $7.50 with tax, which is a little much for fast food for me. The two piece chicken meal is $5; I think I will stick to that in the future. 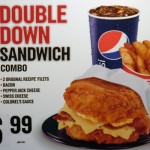