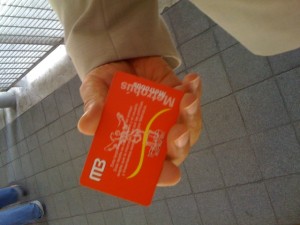 Even though these buses look a lot like the Metro, they have a different type of ticketing system. To ride a Metro Bus you have to have a card that will cost you about  15 pesos (about a dollar USD). Each ride regardless of length will cost you 5 pesos (about 40 cents USD). 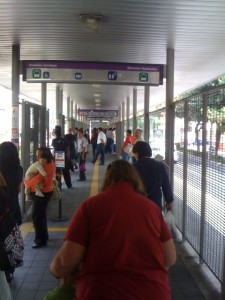 Yesterday we were invited to a relative’s house and had the opportunity to ride a Metro Bus. It was very crowded. I think AJ has gotten used to the fact that there are street performers everywhere in Mexico City and started to sing Jingle Bells on the Metro Bus platform. Unfortunately, Jingle Bells doesn’t translate well into Spanish and it kind of sounded like he was sing “The Heck to You, The Heck to You…” Needless to say everyone started to turn arround to look at this little white American essentially tellling them all off. Quickly realizing the impending doom in the situation we tried to convince AJ he needed to sing another song but he didn’t want to sing somethi ng different. We did get him to stop but he was not happy and was  very grumpy. Oh well, AJ’s visa doesn’t provide for making money as a street performer anyway.