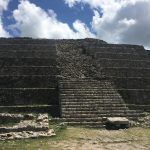 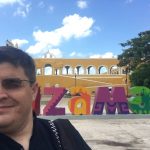 Izamal is also known as the “Yellow City”

Izamal is a modern name that means “city of hills”. This is of course kind of funny because there are not really many hills in Yucatan peninsula. There area is mostly flat and the land kind of is rolling in nature.

What the Yucatan does have however is lots of Mayan pyramids. Izamal is no exception to this fact. Archaeological evidence suggests that the area was first populated somewhere between 600 and 800 BC. Even though the conquering Spaniards did there best to erase the pre-Hispanic past, much still remains.

The Spanish came to the area in the 1540s and the first thing they did was to gather up all the wise men and women and kill them. This was done so that no one could remember ancient customs. Though just a few blocks from the main square is the ruins of Kinich Kak Moo, which roughly translates to the “macaw with a solar face”. Or like I like to think of it, “the Mayan Solar Phoenix”.

Kinich Kak Moo, is a pyramid that is easily passed up by those visiting Izamal. The beautiful “yellow town”, painted in yellow and white in honor of the Vatican is hardly mentioned by the tour guides. When we were there we were mostly by ourselves. Ignored by most, it does hold a secret that only those that visit it and climb to the top will ever discover. That is Kinich Kak Moo commands the best view of Izamal and perhaps the entire Yucatan jungle one can ever see. It isn’t a simple climb. Unlike most pyramids that have have carefully restored steps, Kinich Kak Moo’s steps are not restored. The first level of the climb is easy, but the second set is very rough, but we managed OK by going slow.

Today Izamal is a beautiful city of colonial heritage. In addition to viewing the pyramid, it is better known for the Church of San Antonio de Padua. Many make processions to the church in December to venerate the Virgin Mary, who is said to have cured many people. For a few dollars you can hire a horse and buggy and they will take you on a nice tour through the town. 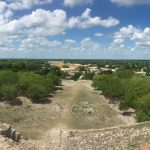 View from the top of the pyramid. 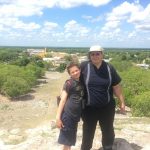 Second level of the pyramid. 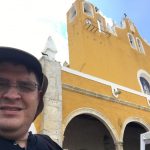 Up close to the Church of San Antonio de Padua. 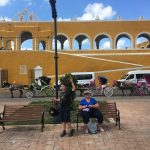 The convent as seen from the plaza. 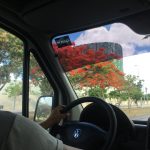 On the way out of Merida we saw the Maya Cultural Museum. 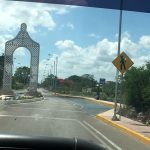