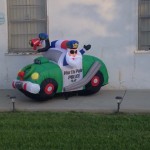 Hope your 2014 Christmas was a good one. For the Pedrozas it was a busy one with lots of sights, sounds, and best of all good people. Here are some of the crazy adventures we had this Christmas weekend. 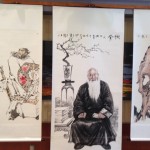 At the CAC (County Administrative Center) next to John’s work there was a temporary exhibit of Chinese art. John got to meet some of the artists at the exhibit who told him that if he was ever in China he could come to any of their shows. 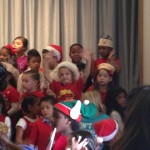 What do you get when you put 40 first graders in a school auditorium with parents and make them sing? You get the glare of 100 flashes resonating in your eyes that make you wonder if you were listening to “Do you want to build a snowman?” or going to a very weird discotheque with singing midgets. 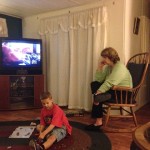 After a very good salmon dinner we all sat down to the holiday classics of “Christmas Vacation” and “Home Alone”. Nothing says the holidays like watching sewer systems getting blown up and robbers being forced out of houses with blow torches.

We saw acts of randomness: 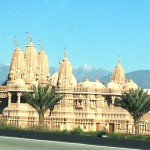 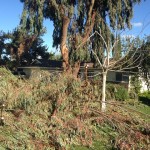 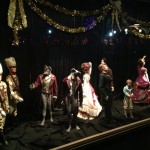 I (John) don’t know what this building on Highway 71 is but I think I am going to have to investigate one day. It looks like something out of Cambodia. Also, it was very sad to see the Jackman’s tree had fallen down. Hopefully the half that didn’t fall down can grow again. As far as the dancers with the rats goes that was an old window display that was on display at the CCCR (Central California Children’s Railroad). It was supposedly a scene from the Nutcracker. I have seen that play many times, but I don’t ever remember rats with bloody swords, that was kind of disturbing, but I was in the minority because everyone else in line said it was very cool.

AJ got a banana! 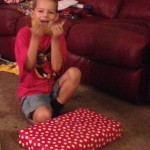 He also got a many other presents including an Angry Bird At-Attack, but let’s face it, no other present is as good as getting a banana.

We put together puzzles: 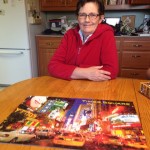 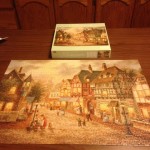 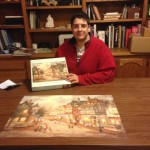 Two puzzles actually. One was a 400 piece puzzle of Times Square. The Times Square puzzle was done in less than an hour. Upping the game, Doris got out a 1000 Masterpiece puzzle of “Bear Corner”. At first glance it looked like a peaceful European village, but if you stared at it long enough (which I John did), you noticed it that it had all these little shadowy bears in it. It was kind of creepy, but considering I (John) finished the puzzle at 1 AM, I could have been seeing things. The point however is that I (John) was victorious!

We ate lots of food: 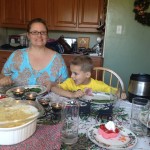 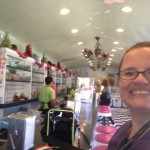 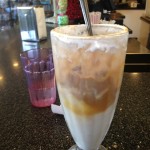 Is there Christmas without food? If there is I haven’t found it. We had some really good food. We had Salmon, ham, dinner rolls (Doris told AJ he could have one and somehow that got communicated as “take 12”), tortas, peppermint ice cream, and a brown and tan (I know I am such a rebel).

We did some running:

I (John) am training for a half marathon in June. Christmas was week #1 for the training. The max run for this week was 3 miles, which you would think after the two full marathons and 4 other half marathons would be a piece of cake, but the sad truth is I am out of shape and it was tough. The good thing however was that I did get my long run in and I am on my way. Lookout Fontana Days 2015, because JohnnyP is back in training mode! 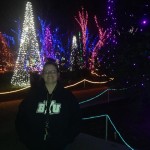 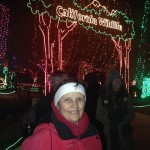 We saw lots of lights. The Mission Inn in Riverside won #1 for nationwide best light display, but I have to say that the lights at CALM (CAlifornia Living Museum) were very cool. I don’t know how many visitors they normally get at the zoo, but I would venture to say it is never as crowded as it was during that light show. To it’s credit, the lights on display were awesome. The train (previously mentioned for the disturbing window display) was also very fun.

Well, that was our Christmas. There were lots of other things we probably did, but I can’t remember them. If you do however feel like mentioning them please feel free to leave a comment. Thank you to everyone that celebrated Christmas with us and we look forward to a great New Year.