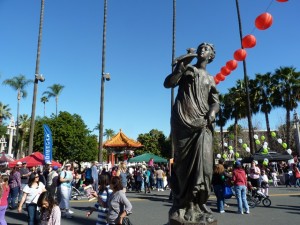 At the festival they had all sorts of booths set up. 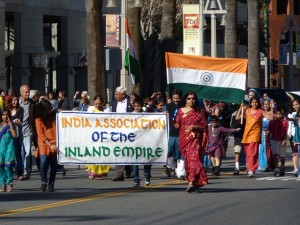 In Riverside they have a very solid Chinese community but it isn’t large enough by itself to justify a festival. So in Riverside they call it the Lunar Festival and include all Asian communities. The activities start out with a ton of firecrackers and then a parade. After the parade they have the festival which included various demonstrations, handicrafts, and booths of all types. 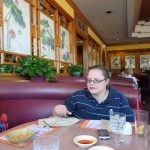 We had a lot of food at the Lotus Garden

Looking at all those booths we were really tired and hungry so we went out to eat. Bet you can’t guess what we ate? Pizza!! No, we had Chinese Food (or what some would say is American Chinese food). We went to a restaurant called the Lotus Garden. It is a really nice place and for $15 a person we got a ton of food! There was soo much food that we had it again on Sunday. My (John’s) favorite was the chicken and rice soup. When it comes to the table they add puffed up rice and it makes a big fizzing sound.