↓
Home→AJ→AJ and the Ontario Reign 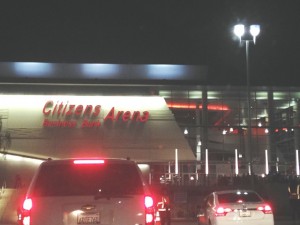 The Citizen Arena in Ontario is really big.

Yesterday (12/6) was AJ’s birthday. He turned 7 yrs. old. Before his birthday we gave him several options on what he wanted to do with his birthday and he decided that he wanted to go with the Scouts and watch Ice Hockey. It sounds like a strange choice since our family doesn’t really know anything about hockey. I (John) had never even been to a hockey game, but that is what all the other Scouts were doing so that is what AJ wanted to do so we went.

Tickets were not that bad, we paid $22 per person and we were in the lower section. The game was the Ontario Reign vs. the Colorado Eagles. They are both minor league hockey teams. Talking to Denise she told me that according to the standings the Colorado Eagles had a slightly better standing. Charged I guess with the hometown advantage the Ontario Reign won the game with a 5-3 score.

They had scouts riding on the Zambonis.

Going to a hockey game was an interesting experience. Since there are no “out of bound” areas the game was really fast. I (John) have been on ice skates before and it amazed me how fast those players could get to the other side of the field and then stop and turn so fast. With all the ice they shaved it wasn’t surprising that they had to run the Zambonis after every period. It was also very interesting how violent the game was. I know hockey is Canada’s national sport. I also know that Canada is a relatively peaceful country. They must vent all their aggression playing hockey. There were several fights during the game. It was kind of hard to explain to AJ why the crowd kept on egging on the fights. I had to explain that just because a crowd of 10,000 people are telling you to fight doesn’t make it a good idea. I also pointed out the penalty boxes on the other side of the field and how the players often ended up there. 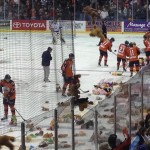 It was pretty crazy to see all the stuffed animals being thrown out on the field.

There were a lot of different forms of entertainment besides the hockey games. At every time out there was a little contest. AJ was really excited to see himself on the jumbotron as part of the “Banjo Cam.” After the first goal the audience threw out stuffed toys for the Toys for Tots program. We even won a free taco in one of the contests. 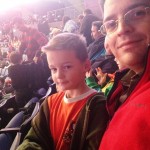 AJ and John in their seats. 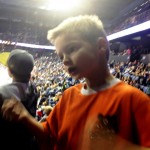 AJ showing off his air banjo. 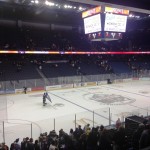 Final score for the game was Ontario 5, Colorado 3. 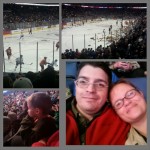 Overall I think it was a good birthday for AJ. He was pretty tired when he got home. As an added bonus I will end with a birthday interview Denise and AJ did: