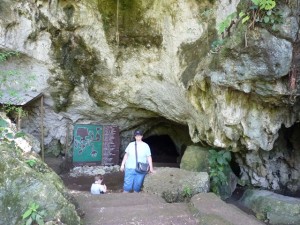 At the cave entrance.

“How far is it to the cave?” I ask. “Oh, about 2 kilometers, Senor.” Responds a small man in Spanish. Two KM is about a mile and a half. We can do that I thought, so off we go marching across the bridge into the small town of Santa Elena. We are now walking for about 20 mins. and so I ask a stranger again “How far is it to the cave?” Again the response “Oh, about 2 kilometers, senor.” I  begin to get skeptical and ask, “Are we going the right way?” “Oh yes, straight as an arrow and soon you will  be there.” We pass the bus stop, the town is now starting to disappear. I go up to a small house and ask about the cave. “About 2 kilometers, senor.” Oh forget it! I say to myself, as I stick out my hand and call a tuk-tuk (a little three wheeled motorcycle taxi). How much to the cave I ask. Ten quetzales (about 1.50 USD) comes the reply. And after about another ten minutes in a tuk-tuk we finally arrived at the caves.

La Cueva de La Sierpiente (The Cave of the Snake). Is not much of an advertised attraction in the Peten area. I only knew about it because I had briefly read about it in a wikipediapost. The entrance fee is 25 quetzales (3 USD) paid to a park ranger on site who will let you open the gate to the mouth of the cave. It wasn’t until we got to the cave that we found out there are no lights in the cave. Luckily, however we found one in the cave of wonders (aka Denise’s purse). So armed with a small LED flashlight we timidly made our way into the darkness. 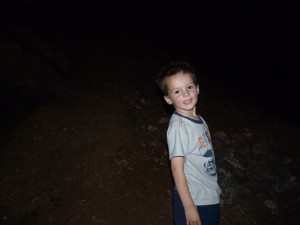 Hey papi, the rock is wet! 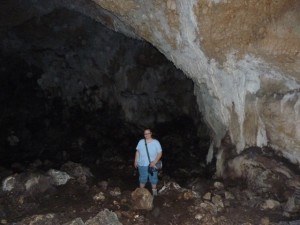 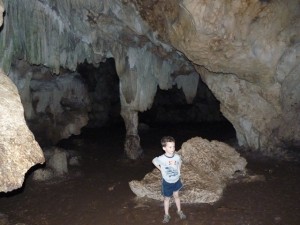 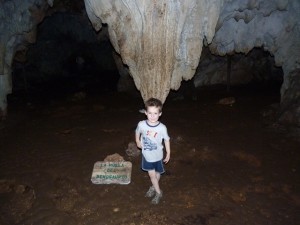 Having only tennis shoes and one flashlight is probably not the best way to explore a cave in a foreign country, but there we were. The cave is ancient as manifested by what appeared to be ancient fire pit built at the end of one of the passageways. Also, I could see that at some point someone had attempted to illuminate the cave with candles. Following the trails in the passageways we were able to climb rockface and then following a winding passageway we were able to see many interesting formations. 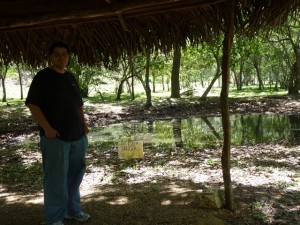 Can you see him? I certainly couldn't

On the way out of the cave the caretaker’s wife came up to me pointed to a pond and told that I should say hello to the crocodile. OK, I thought to myself as I started to look for a fence in which I was going to be able to view this crocodile. I never did find that fence, but I did see this little sign in both English and Spanish “PELIGRO! DANGER!” Not being one to ignore signs I immediately started looking around and there he was. Just one foot away from me was a seven foot long crocodile. It’s a good thing there was that sign there or I would of stepped on that crocodile and then this would have been a very different blog post! 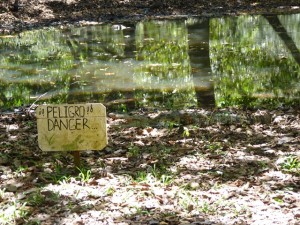 That crocodile really blended well with his surroundings (click to enlarge).