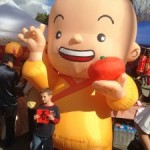 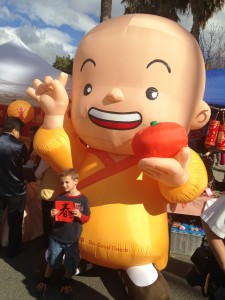 AJ posing with the Chinese character of Happy New Year.

Every year in January the City of Riverside celebrates the Lunar Festival. The Lunar Festival is more of a Chinese tradition but in Riverside the festival is more of a Pan-Asian event celebrating all of Riverside’s Asian ties. This year the city of Riverside added the city of Can Tho, Vietnam as a sister city. This caused a bit of controversy and there have been some protests because of this (click here for more information). I personally didn’t see a problem with the new sister city relationship and noticed that almost all of the protesters were from Orange County.

Going back to the festival. The festival is very typical of what I saw in Japan during the Matsuri season. First off was a parade. The parade featured many groups, dragons, and Chinese fireworks. My favorite part of the parade were the Kung Fu demonstrations and the Japanese flute and drum band. The parade led up to the festival grounds where there were games, crafts, and food.

This year I noticed that they had a Takoyaki (fried octopus balls) and Okonomiyaki booth. I wanted to get some Takoyaki but I couldn’t convince my mother to try it with me. It is just as well because the line was really long. We settled instead for some Mochi and Cheese Okonomiyaki with a side of fried squid legs. Okonomiyaki is a Japanese fair food that can be liked unto a pancake. Instead of being sweet okonomiyaki is savory. It is made with a pancake like batter, cabbage, potato, green onions, and fish flakes. We got Mochi and Cheese as an extra topping. Mochi is pounded rice, I had never seen that as a topping before. Also, in Japan there isn’t many dishes with cheese so I am guessing that was a California okonomiyaki. It was very good. Heated the cheese and mocha got really gooey and it was almost like a pizza without dough. I hope they come back next year. 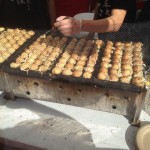 Watching how they make Takoyaki is always interesting. 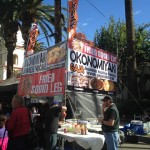 I was immediately drawn to the Okonomiyaki sign. Unfortunately, the wind got really strong and they had to take it down. 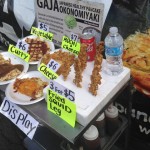 A display of some of the okonomiyaki being sold. 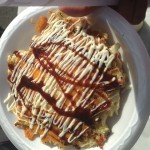 My finished Okonomiyaki with mayonnaise and sauce.

We were at the fair for about 4 hrs. and then we went on to Knott’s. It was  a long day but it was fun. 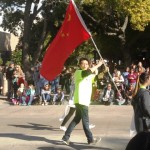 A Chinese exchange student in the parade. 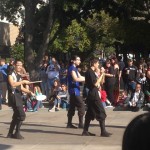 I enjoyed listening to the Japanese flute and drum players. 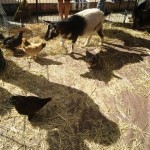 This year is the year of the goat. 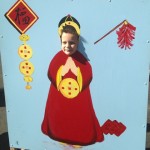 AJ with a Chinese cut out. 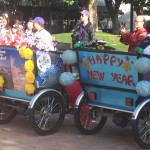 Some pedal carts were decorated by the various sister cities. 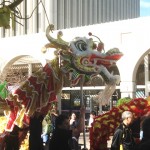 A good luck dragon made it’s way through the parade. 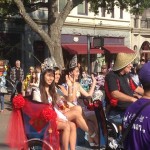 Ms. Asia and her court. 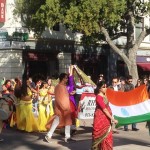